“How long will you simpletons love naiveté? How long will… fools hate knowledge?” (Proverbs 1:22-23).

“How long will you simpletons love naiveté? How long will… fools hate knowledge?” (Proverbs 1:22-23).

In my last column of this series, I began telling the story about a conversation or argument (in the legal sense) that took place in English 102 between myself and a pretty girl who sat behind me. It all began with some comments she made about politics and it quickly moved onto the topic of evolution. (See part 4.) In our conversation she admitted to believing in materialism as a philosophy; though it appeared she did not know that her belief system had a name.

As our conversation continued along those lines, Miss Pretty confessed that she did not believe in a god, or life after death, or the soul. She told me she was the product of a Roman Catholic education and that it was all “a crock.”[1] Then Miss Pretty said, “Oh, and that God in the old book is not the same God from the new book. He’s a whole lot meaner.”[2]

At that moment, I wasn’t fast enough on my feet to think of a proper response to her idea that the God of the Old Testament was different from the God of the New Testament, I could have asked if God’s love was spoken of more in the Old Testament than in the New. The OT language being so incredibly beautiful when it expresses God’s love for His people: “I have loved you with an everlasting love” (Jeremiah 31:3). “He will take great delight in you, he will quiet you with his love, he will rejoice over you with singing” (Zephaniah 3:17, NIV.) See also Psalm 103:8-17,  Isaiah 40:11,  Isaiah 49:15,  Jeremiah 31:3,  etc. “The Lord [is] the compassionate and gracious God, slow to anger, and abounding in loyal love and faithfulness, keeping loyal love for thousands, forgiving iniquity and transgression and sin” (Exodus 34:6-7).

Oh, yes, let’s not forget the next part of the above verse: “But he by no means leaves the guilty unpunished.” So also I could have asked her, “In both the Old and New Testaments, what are the repercussions and consequences for not honoring God, for not putting one’s faith and trust in Him, for rejecting Him and rebelling against Him? Did not both the ‘old and new book’ teach that such people stand condemned? That they will face His wrath? That they will be judged, destroyed, and damned?"[3]

Old Testament: “They will go out and observe the corpses of those who rebelled against me, for the maggots that eat them will not die, and the fire that consumes them will not die out” (Isaiah 66:24).

New Testament: “Then he will say to those on his left, ‘Depart from me, you accursed, into the eternal fire that has been prepared for the devil and his angels!” (Matthew 25:41).

I probably mentioned that the God of the Old and New Testaments were one and the same; that, in fact, Jesus was the incarnation of that very same God she didn’t like so much. She went on to say that she didn’t believe Jesus was the Son of God or that He rose from the dead. She thought the Romans took the body to prevent His worship.

Then I asked, “Why would the Apostles have died for a lie?”[4]

“Well,” she answered, “we don’t even know what happened back then.” (Wow, same kind of response my Philosophy 101 professor used.) First she had said what she thought might have happened back then. But, when I call her ideas into question or ask a serious question, the past was dismissed as being unknowable… So her speculations and imaginations about the past were valid as arguments, but actual books of antiquity (the New Testament books) are not? It’s also strange that, according to her, we apparently can know EXACTLY how evolution occurred millions and millions of years ago, but we can’t know what happened in history 2000 years ago.[5] Interesting.

“People change history all the time,” she said.

“Was George Washington the first President?” I asked.

“We know that,” was her response.

“How about Hannibal crossing the Alps?”[6]

A final observation from this back and forth between myself and Miss Pretty is that during the course of this conversation I noted a strange phenomenon occurring: A Dr. Jekyll and Mr. Hyde transformation began to overtake Miss Pretty. Prior to this day, I remember finding her attractive… but as the debate continued I noted that she was becoming less and less so. I am reminded of a line somewhere in Stephen Arterburn’s book, Every Man’s Battle,that says something like this: “Often a good way to kill off an infatuation for someone you do not know very well, is to get to know them” i.e. once you get to know them better, they might no longer be Miss Pretty, but instead might become Miss Pretty Darn Annoying! She was becoming living proof of the proverb that says, “Charm is deceitful and beauty is fleeting” (Proverbs 31:30). Fleeting before my very eyes!

“The woman Folly is loud; she is undisciplined and without knowledge” (Proverbs 9:13, NIV). And without attraction…


[1] Sadly, I can’t tell you how many people I’ve run across who have told me they turned away from God because of “a Catholic school education.” One man summoned like this: “For eight or twelve years they told us all the stories in the Bible were true and then suddenly they started telling us that they weren’t true, that the stories were all made up to teach life lessons, morals, and stuff…” Certainly, contradictory messages, and false teachings like those, might effectively turn young people off to the Christian message. Sadly, Christianity was misrepresented to them.

[2] This question can be answered in part through the following resources:

Snippets by Paul Copan, for example, found at http://www.epsociety.org/library/articles.asp?pid=45&ap=9

[3] Okay, I know this is not completely “kosher” but I am reminded of a young conservative Christian blogger who posted a picture of an anti-war bumper sticker that read “Who Would Jesus Bomb?” He answered, “Ummm… Probably Sodom and Gomorrah?”

Still, there are orthodox views of Jesus’ “end times” predictions (Matthew 24 and Luke 17) that would underscore Jesus’ “return” in judgment on and destruction of Jerusalem and the Temple in A.D. 70.

[4] I argue this case elsewhere: http://www.examiner.com/christian-perspectives-in-philadelphia/the-resurrection-of-jesus-christ-part-ii

[5] Please note this is sarcastic!

"Rescued, ransomed, and saved because of the love of God the Father, through the regeneration of the Holy Spirit, thanks to faithful preachers and teachers of the Word, attained by the perfect life and merit of Jesus the Messiah, His substitutionary death and physical resurrection from the dead. Completely undeserved and gifted to me." Steve would label himself an apprentice Christ follower, an Evangelical Christian with strong Reformed beliefs, a "Five Point Calvinist" (if you must). Steve loves discussing and debating the two "taboo" subjects: Politics and Religion. He tries to read and listen to a minimum of forty books a year and realizes that no matter what topic or genre, whether Bible, theology, Christianity, history, biography, philosophy, political, social commentary, pop-culture, or even fiction, they all tie together in the spider's web of worldview. His favorite authors are C.S. Lewis, James R. White, Gregory Koukl, R.C. Sproul, J. Gresham Machen, G.K. Chesterton, J. Budziszewski, and Peter Kreeft. He loves Charles Haddon Spurgeon, Voddie Baucham, and Dwight L. Moody. Steve's hobbies are generally reading and writing, music, hiking, and laughing. He has been writing songs/lyrics since the age of eight and has played in a few Christian Rock bands. He has written poetry, several biblical studies over the past decades, and has one finished book manuscript entitled, “Shaken Faith: When God Has Let You Down” (written with friend and co-author Al Rossi). He has also written for the now defunct Examiner website as the Philadelphia Christian Perspectives Examiner. He wishes he could write some fiction. 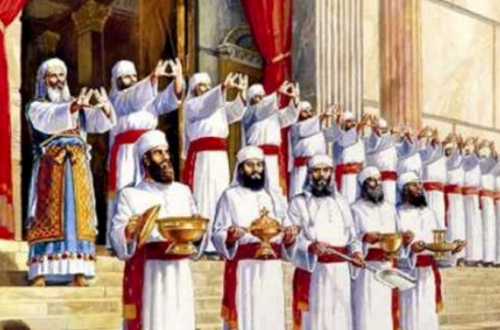 The Tabernacle of Moses – God’s Heavenly Pattern for our Spiritual Transformation – Part VI: The Priestly Garments