My husband is a big Tom Waits fan. Tom’s voice is unique; knarled and gravelly, true, raw, spinning elaborate and oblique musical tales.  He’s got some interesting songs out there (not for the faint of heart…some songs should come with a potty-mouth label); musical vanguard stuff.

I’m not sure I’m cool enough to count him as part of my musical cache, but I’m glad I got a chance to listen.

But…one day I was forced to hear, against my will, a Tom Waits classic. Almost 20 minutes. One song. On repeat. No verses, just chorus.

It was as if the length of the song was either proving or testing the assertion of the chorus.

Which intrigued me at first. Then annoyed me.

Then I just wanted to hurl the computer that was playing the song.

The vocals weren’t that good. The chorus never stopped.

And after all, I had other things to do and hear, thank you very much. We were already running late for a Chipotle run. Why stop to hear a…worship song?

I have to thank Tom Waits and hey taught me a lesson. The backstory is that a composer, , found a recording of a homeless man singing these words.

The composer gathered a symphony to play around the man’s vocals and then added Tom Waits’ vocals in the last 10 minutes. The simple song of a man in inauspicious circumstances became the singular focus and inspiration of master musicians. Ironically, the homeless man died before he heard the heightened version of his praise.

But one day, the chorus of gratitude to Jesus will indeed never stop. The voice of every single redeemed person will ring out in unending gratitude because of the endless potency of our Savior’s blood.

It will be the sweetest chorus I will ever hear, and nothing else will matter more.

I hope I get to stand next to the man who taught Tom Waits about the Never-Failing Blood. 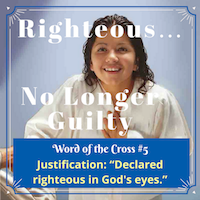