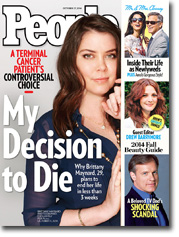 There is a way that seems right to a man, but the end thereof is death. (Proverbs 14:12)

Brittany Maynard, a young woman with an incurable brain tumor, recently took her own life rather than suffer through a painful, difficult descent into natural death. She had moved from California to Oregon, which is a “right-to-die” state that allows terminally ill people to be assisted in ending their lives on their terms.

How should we think about this? It depends on your starting point.

But leaving God out of the picture doesn’t make Him go away.

It just means people are in denial about His existence. About His right to determine life and death because He is the creator of life.

If your starting point is God Himself, who creates people for His pleasure and for His glory (Rev. 4:11, Eph. 1:6), then we are accountable to the Author of Life, and ending one’s earthly life is not a choice we have the right to make. If your starting point is God Himself, who made us in His eternal image to live forever, then ending one’s earthly life is the doorway to the next life. Not believing in life after death doesn’t make it go away. As one character says in the movie City of Angels, “Some things are true whether you believe in them or not.”

As far as we can tell from what the media presented, Brittany Maynard left God out of the picture in deciding to end her suffering. If she died as she may have lived her life, separated from the God who is created her, then even on her worst days of tumor-induced pain on earth, that was as close to heaven as she was ever going to get. If she remained separated from God as she drank a sedative mixture that allowed her to fall asleep and then die, she made a horrible choice to enter eternity remaining separated from God forever. That means separated from all that is good, from all that is kind, from all life and light and love and joy. Because all these things are found only in God, and if we remain separated from Him, we cut ourselves off from their source. We are left with evil, cruelty, death and darkness and isolation and despair. An eternity of it. There is no dignity in this kind of unending death.

It’s possible that she cast herself on God’s mercy in her last minutes; I don’t know what the state of her soul was as she drew her last breath. I truly hope so.

But the horrific earthly suffering she opted out of, would be nothing compared to the eternal suffering of being cut off from all that is good. I don’t mean to make light of the indescribable suffering of those dying from terminal diseases. But it’s essential to not leave God out of the picture, and to remember He does great things in people through suffering. Not just the one with the illness, but the family members and others around them.

Responding to this news about Ms. Maynard, one woman wrote of her husband, “a man who suffered well. It was agony… Watching him suffer. Knowing there was nothing I could do to heal him and little I could do to lessen his suffering. All I could do was hold his hand during biopsies and chemo. During the pain and nausea. I marveled at his strength, his faith, his refusal to give up. I held his hand when the doctor told us there wasn’t anything else they could do. When the morphine caused hallucinations and he forgot we were married. I held his hand and discovered that if you love someone… If you have faith, you can tap unknown reserves of strength, you can endure pain unimaginable. Neither one if us picked the other for the ability to suffer well. But because we truly loved, we were able to put the other person first. That’s love. All the feel good stuff is just romance. It’s nice. It feels good. But it’s small comfort when illness and death come knocking on your door. I’m so blessed for having had the opportunity to suffer alongside B____. He was an amazing man!”

I think that is what true “death with dignity” looks like: being faithful to the end, suffering well, trusting God when the storm rages on.

Hero to many of us, Joni Eareckson Tada wrote an open letter to Brittany weeks before she died. Joni has lived longer, and suffered more, than the vast majority of quadriplegics. She knows something of suffering, dealing with a severe handicap plus cancer plus chronic pain. Joni’s voice deserves to be heard above all others, I believe:

“If I could spend a few moments with Brittany before she swallows that prescription she has already filled, I would tell her how I have felt the love of Jesus strengthen and comfort me through my own cancer, chronic pain and quadriplegia. I would tell her that the saddest thing of all would be for her to wake up on the other side of her tombstone only to face a grim, joyless existence not only without life, but without God.”

This is a deeply sobering, difficult discussion. Please don’t leave God out of it.

Addendum, Nov. 7: My church released this excellent Real Truth Real Quick video about “Death With Dignity” I invite you to watch: 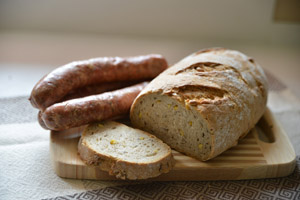 “How Often Do You Fast?” –A Question to Make Christians Uncomfortable 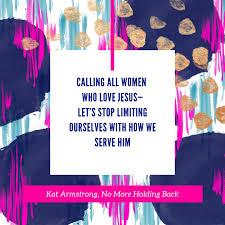