Thanks Be To God – For What?

Thanksgiving is one of the most precious times of the year because we have so much to be thankful for: our nation, family, life, health, opportunity, the list never ends.

But what if you’re in a season of uncertainty, if you’re asking what God is doing in our nation or your family is struggling or your health is questionable or you’re unemployed? What if you’re living in confusion and fear and don’t know how to respond to what is happening to you? How can you be thankful?

The apostle Paul faced that exact situation. He had written a letter of rebuke to the Corinthians and then sent his prime trouble-shooter, Titus, to follow up. When he arrived at the place they had agreed to meet so Titus could update Paul, the younger man was not there, and Paul was greatly troubled. What if the Corinthians had rejected Titus or something had happened to him? What if they were angry over his letter? What if Paul had made a mistake in writing as he did? Paul was distressed. He could find no rest for his spirit and, although he had a wide open door for ministry, he could not stay. He was driven to search for Titus. (II Corinthians 2:12-13).

Having described his stress and confusion, the words that come in II Corinthians 2:14 don’t make sense. Thanks be to God. . . How could Paul be thankful under such overwhelming stress? The answer comes later in II Corinthians (7:5ff) where Paul explains that he found Titus and received a good report. Although the Corinthians had been offended at first, they had changed their attitude, and Paul’s action was confirmed. Notice that Paul’s thanksgiving came after the fact of what God was doing even though Paul had lived in the fear that he had done wrong.

Through this experience Paul learned one of the greatest realities concerning thanksgiving: we must live in constant thanksgiving for what God is doing even when we don’t know what that is. God doesn’t usually tell us what He’s doing; He just does it and shows us when we need to know.

So if you are living in fear for our nation or for your family or for your health or for you economic well being, know that God is at work, and you can be thankful for what He’s doing even when you have no idea what that is. Now, of course, God may not always work things out the way we want Him to, but He will keep His word and meet your needs no matter what happens. There is no reason for you to live in fear or in stress. Thank Him no matter what He’s doing and find His peace in the most difficult situations of life.

Remember this: We never know what God is doing until He does it, but we can be thankful while we wait. I hope your Thanksgiving will be a happy one, but I hope even more it will bring you to a new level of trusting God as you find His triumph in Christ. 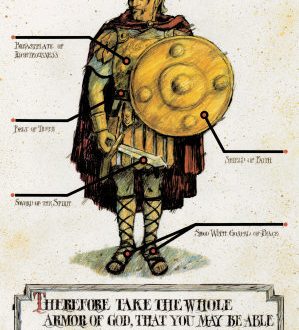 Healing by Medicine or Miracle?