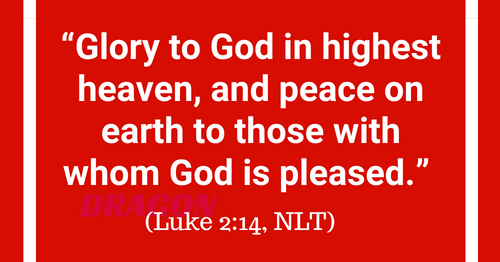 “Glory to God in highest heaven, and peace on earth to those with whom God is pleased.” Those are the words the collection of angels declared to a band of shepherds. Their words filled the night sky right after an angel of the Lord announced to those shepherds about the birth of Jesus who was “the Savior…Christ the Lord.”

An angel of the Lord appeared to them, and the glory of the Lord shone around them, and they were absolutely terrified. But the angel said to them, “Do not be afraid! Listen carefully, for I proclaim to you good news that brings great joy to all the people: Today your Savior is born in the city of David. He is Christ the Lord. This will be a sign for you: You will find a baby wrapped in strips of cloth and lying in a manger.” (Luke 2:9-12, NET)

Can you imagine the scene? The angel of the Lord appeared. This was an important angel with an important task. The glory of the Lord shone around the shepherds. Of course, they were absolutely terrified! I would be, too. Wouldn’t you? So, the angel representing God making this grand birth announcement told them to not be afraid.

Then, the angel said this, “Listen carefully.” I had not noticed this before in readings of the passage. The word the angels used in Luke 2:10 (Gr., idou) is traditionally translated, “Behold!” The KJV says, “Fear not: for, behold, I bring you good tidings of great joy…” Some of the newer translations skip it altogether. So, I was curious when I read the NET version above. I learned that there is a Greek word inserted that means this, “bidding the reader or hearer to attend to what is said: ‘Behold! See! Lo!’” Attend to what is said. Pay attention. Listen carefully.

How many times in the Bible does God say this to people? Zillions! It is used 213 times in the New Testament. The Hebrew equivalent is used 843 times in the Old Testament. Much of its use is when God is speaking to His people. “Give this your attention.” “Listen carefully.”

How well do we give attention and listen carefully to God’s words declared to us? If this happened today, those shepherds might have started taking video with their phones instead of listening to the actual words spoken. We never do that, do we?

The angel of the Lord—God’s special representative—proclaimed good news that would bring great joy to all the people. I think of Simeon and Anna whose stories are also recorded in Luke chapter 2. They were waiting for the coming of the Messiah and were filled with great joy when they saw the baby for themselves.

Then, the angel told the shepherds that their Savior was born—a Savior who was their promised Messiah (Christ is the Greek equivalent of the Hebrew word for Messiah). This Christ was also the Lord. Throughout the New Testament, Jesus is called Lord, meaning Son of God.

The angel told the shepherds how to find this baby. “You will find” means “GO!” The shepherds were instructed to go find the baby. And they obeyed!

When the angels left them and went back to heaven, the shepherds said to one another, “Let us go over to Bethlehem and see this thing that has taken place, that the Lord has made known to us.” So they hurried off and located Mary and Joseph, and found the baby lying in a manger. (Luke 2:15-16, NET)

We also know how to find the Savior who is Christ the Lord. He is the one who died on the cross and rose again from the dead. He is the one who is sitting on the throne at the right hand of God the Father. Yet, He is also “with us always” (Matthew 28:20) through the Holy Spirit who indwells every believer. Every human can and should go find Him today! Have you obeyed God’s invitation to you to find Christ, the Lord?

Through finding Christ the Lord, we also find peace.

After the angel of the Lord finished the grand birth announcement,

Suddenly, the angel was joined by a vast host of others—the armies of heaven—praising God and saying, “Glory to God in highest heaven, and peace on earth to those with whom God is pleased.” (Luke 2:13-14, NLT)

A vast group of other angels appeared. How vast? The Greek language describes it as a “multitude” of the armies of heaven. These were angels whom God created at the beginning of time. They were not humans turned into angels. I am picturing hundreds of angels praising God together in unison—like spectators in an arena shouting a cheer together. Their voices had to be unified in declaring these magnificent words so that the shepherds could understand what they were saying!

The angels began with the words, “Glory to God in highest heaven,” and ended with the words “peace on earth to those with whom God is pleased.” God’s gift of His Son is celebrated in heaven where God dwells all the way to earth where people dwell—people who need the gift that God offers them.

Hundreds of years before this night, God promised to send the Christ, the anointed one who would be the deliverer they needed. The people lived with a sense of hope and expectation. Now, that promise is fulfilled! Jesus the promised Messiah had been born as a human baby in Bethlehem. All heaven is giving God the glory. And on earth, humans would experience God’s peace. But what kind of peace? And with whom?

Since the King James Version of the Bible came out in the 1600s, most people know the end of Luke 2:14 by the familiar words of the KJV translation, “And on earth peace, goodwill to men.” Most Christmas carols include this translation.

If you do a translation comparison of Luke 2:14, you will see quite a variety of phrases used.

“Glory to God in the highest heaven, and on earth peace to those on whom his favor rests.” (NIV)

“Glory to God in the highest, and on earth peace among people with whom he is pleased!” (NET)

“Glory to God in the highest, and on earth peace among those with whom he is pleased!” (ESV)

From the original words used by the angels, peace is assured only to those pleasing to God, who are the objects of His good pleasure, the ones who delight God and thus receive God’s kindness. Those are the ones on whom His favor rests.

Peace Comes from Trusting in Christ, the Savior

The subject of peace comes up frequently around Christmastime. And often the message of the angels in Luke 2 is taken as a call for men and women to all be at peace with one another. But the angel did not call for world peace, nor peace between neighbors…The angels said peace will be among men with whom God is pleased. With whom is God pleased? Those who have placed their faith in His Son. We know that God is not pleased with all men, in fact, all of mankind is in open rebellion against God. Only those who have placed faith in Jesus have found His peace.

It is all about what God is doing, not about human will. This is the good news. God came to earth to live as a human being, die for our sins, and rise again so that God could offer us His grace—His favor—wrapped up in the gospel. We receive this grace—God’s favor—by faith in His Son Jesus Christ. We receive deliverance as a result of our faith in Christ. The deliverance is not from enemies on all sides. The deliverance is from the greatest enemy—SIN—and its greatest consequence—death. The gospel is God’s cure for our fatal sin disease!

Believe in Jesus. Commit your life to Him rather than to your own way of living. God will be pleased with you. His favor will rest on you. He is no longer angry at your sin. You will receive complete forgiveness. You receive a restored relationship with the God who loves you. You receive redemption from sin and deliverance from death. This is the Good News! Actually, that is great news! It is one of the gifts of Christmas that lasts forever!

Peace TO and AMONG Believers

Therefore, since we have been declared righteous by faith, we have peace with God through our Lord Jesus Christ, (Romans 5:1, NET) 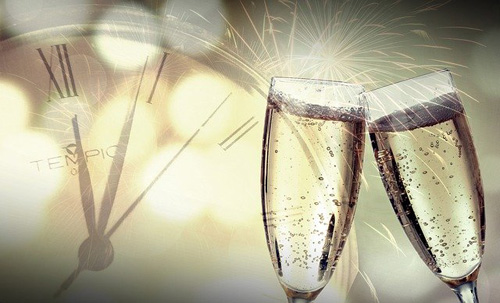 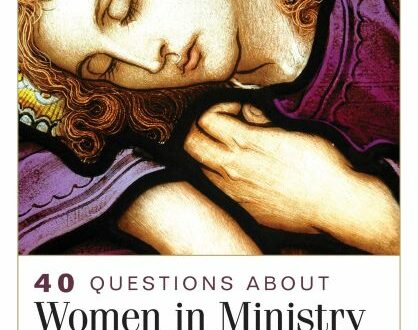 Revisiting the Topic of Women in Public Ministry: My Recommended Resources  (2022)