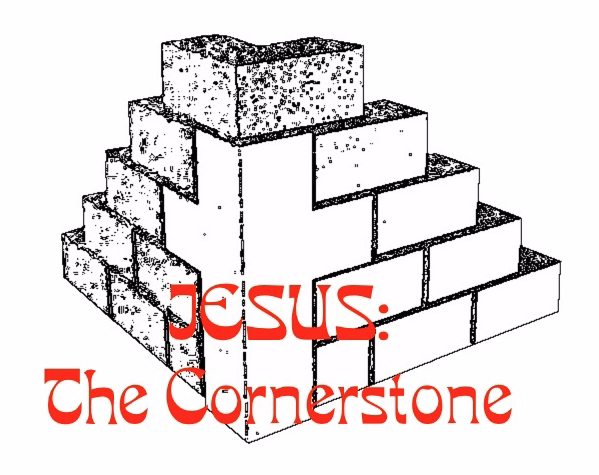 The cornerstone is the first stone set in the construction of a masonry foundation. It is vital since all other stones will be placed in reference to this stone, thus determining the position of the entire structure. (2) The cornerstone was usually one of the largest, most solid, and most flawlessly constructed of any of the stones of a structure.

The Bible describes Jesus as the Cornerstone that His church would be built upon, a unified body of believers, both Jews, and Gentiles (i.e., everyone else).

Jesus is the foundation of the church, represented metaphorically as the cornerstone in the Bible.  It is on Jesus Christ alone we build. (Psalms 127:1) When we place our hope or confidence in anything or anyone else, we will always be sorely disappointed. (Jeremiah 17:5) Again, Christ is our cornerstone; we trust in him alone. The house built on sand does not stand; however, the house built on the rock withstands the winds and waves of temptations and difficulties.

However, the Bible states that many will stumble and trip over the simplicity of the Gospel (1 Corinthians 1:18-23. Romans 9:30-33. Hosea 14:9), thus falling on the cornerstone and being broken to pieces (i.e., destroyed and suffering forever in Hell). (1)

Nevertheless, some will believe the message of the Gospel of Peace, repent of their sin, and choose to accept the Lord Jesus as their personal Savior and be born again from above. (1) These saved ones will begin the journey to reveal in their thoughts, emotions, and will the character of Christ Jesus that was placed in their spirit during the new birth (Romans 8:9).

That is, they will be “crushed” by the Cornerstone so that the spirit of Jesus Christ within can be released for all the world to see! (Romans 8:18. 2 Corinthians 4:17) This crushing will occur as they learn to lean on and trust our Great High Priest, the Lord Jesus Christ, through the many trials and tribulations of life. (1)

Olive oil is produced by growing olive trees [see graphic above], harvesting the olives (at around September time frame), crushing them with an oil press, and collecting the golden juice. This process started about 5000 years ago, and its popularity and worth have increased ever since. Olive oil was used as cooking oil, food, lighting fuel, soap making, religious ceremonies, and medicinal use.  Its production was one of the major sources of income in Israel over thousands of years, including in modern times when olive oil is an essential ingredient in Middle Eastern cuisine. During the Roman and Byzantine periods, the number of oil presses was in the thousands; many farmers had their own private installations, and larger public industrial complexes generated a vast amount of olive oil. (3)

“The olive oil production process was based on two major steps. The first step involved crushing the olives using a crushing stone and then collecting them into a basket. The second step is done on another installation: the basket is pressed with force, extracting the oil out of the crushed olives and collecting the juice into a storing vat. There were different types of machines that were used to crush the olives and then press the oil out of the crushed olives. They differed in their size, method of operation, use of human or animal power, infrastructure, and capacity. Most of the oil presses had a single crushing stone and basin, and one or two pressing devices.” (3)

The olive crusher (graphic above) used a large rolling stone to crush the olives.  The stone was held upright by an axis, which was connected to a long handle. The handle was pushed by humans or animals. The mashing stone rolled along a cavity on the circumference of the base, crushing the olives. The crushed olives would then be collected into a basket and then further processed by the olive press. (3)

The olive press device was the second step in olive oil production, where the crushed olives were pressed with force in order to extract their juice. (3)

“This is a typical lever-based oil press (see graphic above) which was in use in the Biblical periods. Later the oil press evolved into other types of machines. In this oil press, a stone weight was tied to the edge of the wooden lever, pushing the lever down. The use of a lever exerts a large force over a small distance. The force of the lever pushed a flat stone down on a basket, which contained the olives. The stone squeezed the basket, extracting the precious olive oil unto the round grooves of a basin stone. The juice flowed down along these grooves, out through an outlet in the basin, and down into a collecting vat. The olive juice contained water and oil. After a few days, the lighter oil in the juice floats above the water, and it is then collected and stored in jars.” (3)

In biblical times there were three pressings of olives during this process, each with a unique application:

The Orchard of the Olive Press

On the night that our Lord was arrested, He went to the Olive Orchard at Gethsemane to pray. Interestingly, the word “Gethsemane” means olive press.

Dear hearts note there are no coincidences with God.

Jesus had previously foretold His apostles what was going to happen to Him in Jerusalem but they did not understand.

Jesus allowed Himself to be “crushed” in the Olive Orchard of Gethsemane to point the way for all of us His disciples to follow in surrendering our wills to our Heavenly Father’s will even during trials and temptations that culminate in death. He then modeled what He requires of all those who desire to be His followers. We must deny ourselves, take up His cross daily, and follow Him no matter the cost. We must surrender to God our Father’s ordained “crushing and pressing” even to the point of death.

Jesus is made sin for us and all the curses, including all the plagues, start to come upon Him.

Jesus’ sweat, His water, turned to Blood, as the First Plague upon Egypt descended upon Yeshua (Jesus). (Exodus 7:19,20. Galatians 3:13) Jesus’ “crushing” initiated the release of His blood, His life. (1)

First Pressing after the Crushing (1)

The Light of the World, our Savior, the Lord Jesus Christ! Jesus allowed Himself to be “pressed” by the Chief priests, experts in the law, temple officers, and guards, while being questioned by the Jewish religious leaders, for our illumination (John 8:12) to the fact that He is The Way, The Truth, and The Life. (John 14:6) That is, He is the long-promised Messiah!

Second Pressing after the Crushing: (1)

The Lord our Healer, the Lord Jesus Christ! Jesus allowed Himself to be “pressed” for our healing by the decision of both Jewish and Gentile leadership and people. (1)

The tearing by Caiaphas of the priestly garments represented the abolishment of the Levitical Priesthood and its replacement after the order of the Melchizedek Priesthood. (Psalms 110:4) That is, Jesus was to become the eternal High Priest, our Great High Priest. (1) Hallelujah! (Hebrews 5:6,10; 6:20)

Third Pressing after the Crushing: (1)

The Lord our Righteousness, the Lord Jesus Christ! Jesus allowed Himself to be “pressed” to death on the cross (1) for our cleansing (i.e., remission and forgiveness) of all sins past, present, and future. (1)

Lord crush me that I might live and yet not I but the Lord Jesus within me! Search me, oh God, and know my heart, try me and know my fears, see if there is any wicked way in me and lead me in the way everlasting. Form in me a meek, submissive, humble, repentant, and undividedly loyal spiritual heart that trembles at Your Word. Cause me to know Jesus and the power of His resurrection, the fellowship of His suffering being conformed to His death to self that I might experience His resurrection in me, which is the hope of Glory! Amen.

(4) “It is finished or completed” is the translation of the Greek word tetelestai which only appears twice in the Bible (John 19:28,30).  Jesus says tetelestai here in the perfect tense, which is very rare in the New Testament and has no English equivalent. The perfect tense is a combination of two Greek tenses: the Present tense, and the Aorist tense. The Aorist tense is punctiliar: meaning something that happens at a specific point in time; a moment. The Present tense is linear: meaning something that continues on into the future and has ongoing results/implications. The combination of these two tenses in the perfect tense as used in John 19:30 is of overwhelming significance to the Christian. When Jesus says “It is finished” (or completed), what He is actually saying is “It is finished and will continue to be finished.” The first element of the perfect tense: the Aorist, punctiliar, point in time statement “It is finished” is powerful. Mathew Henry describes all that is finished at that exact moment in time: “It is finished; that is, the counsels of the Father concerning his sufferings were now fulfilled. It is finished; all the types and prophecies of the Old Testament, which pointed at the sufferings of the Messiah, were accomplished. It is finished; the ceremonial law is abolished; the substance has now come, and all the shadows are done away. It is finished; an end is made of transgression by bringing in everlasting righteousness. His sufferings were now finished, both those of his soul and those of his body. It is finished; the work of man’s redemption and salvation is now completed.” The Aorist tense is only half of the perfect tense! The second element of Jesus’ statement is equally important: the Present, ongoing, linear “and will continue to be finished” component of the perfect tense. This indicates the ongoing nature of our salvation. This is so important because it indicates a condition, a state of being, a resting place. In conclusion, in Jesus’ statement “It is finished,” we have a declaration of salvation that is both momentary and eternal, Aorist and Present, linear and punctiliar. We are saved at a specific point in time, “it is finished,” our debt is paid, we are ransomed from the kingdom of darkness, and then we confidently rest in the reality that “it will continue to be finished” because we are in a position of grace and stand justified for all time before God. One Greek word, tetelestai, is spoken in the perfect tense by Jesus on the cross, and it was finished at that moment and for all time. (http://www.ciu.edu/content/it-finished-look-greek)

(5) Credentials of Jesus as the Messiah through Fulfilled Prophecy (1) 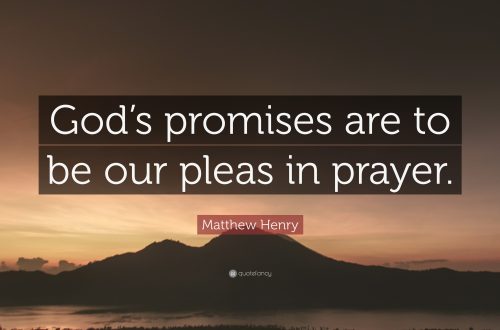 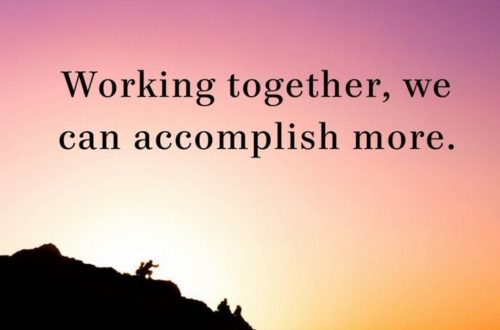